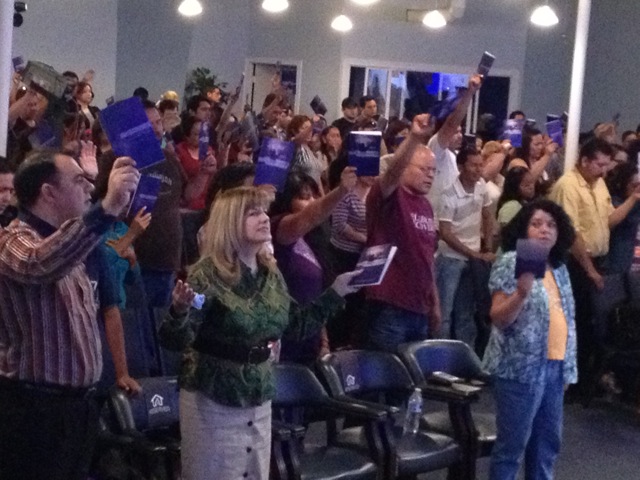 I’m not watching TV and eating like I used to. I thank God for all the things he is doing for me. I use to eat a lot and fight with my wife all the time, when she would tell me to read the bible we would fight now I realize that I didn’t know how to read the bible. By coming these 21 days, God has showed me how to read a little more and do my devotionals.

God has stopped my addiction to drugs. He’s breaking the chain of anger and lustful thoughts, He’s renewing my family and our relationship and I’m falling in love with him more and more every day.

A couple in our church confessed their pride and the wife had harbored bitterness and anger for years (2 days ago!) Today, they had a healing in the finances when they sold a costly item and can pay many bills off!

I was mad at God because I was not working I did not have insurance for work and my wife didn’t have any medicine for 2 months and Thursday I got a letter to go to a doctor but at 2:30 the doctor asked her questions. He said she had breast cancer/radiation/2 operations on her breast and she came out all right. We went to a doctor and she had neck surgery and with 3 disc and another 8 disc in the back. The operation took about 8 hours. Doctor said she might not walk again. She came close to dying. I was mad at God because I started work Monday and I thought the medicine would cost about $2,000. The doctors sent me to another pharmacy because CVS takes 6 hours and the one I went to take half an hour. Now my wife is better, She is diabetic; her sugar level is normal again. I prayed that she would get her medicine without it she would die. I’ve been coming every day to pray and he does miracles, God has answered prayer.

Before the 21 days I thought I was doing ok, after the first day I realized my heart and my mind were filled with too many distractions. I couldn’t pray or even think without a random thought coming into my mind. Finally I was able to see all the pride and bitterness I had, I have been able to focus more on God now that I have little to no distractions. I no longer get angry over things. I have never been so happy and I know this joy is coming from the Lord. My mind was also filled with perversion but those thoughts are now out of my mind and I feel free from all the bondage. I am excited about life now before I was just living to live.

He testifies that since he has started the 21 day face to face his anger, pride and inpatient behavior have been going away. He also says that his character has change a lot in his job with his workers and at home with his family. (Pride mostly is turning into humbleness.)

Thank you God because during these 21 days of face to face with God, he has helped me break all pride with my daughter Joanna. thank you Lord. (He actually took her on a father daughter trip to Disneyland this past weekend, she was happy.)

We have been spending more time as a family, there has been more peace and happiness in our home with our children.

I have been in this church for 3 years and still had some books of false prophets that I’ve had put away for 10 years, these books are from when I was involved in witchcraft from where my “spiritual Mother” would teach me. During the 21 days God took me to remember about those books and take them to the altar. I also took out some bears that I had in my room, my children took out some toys that they didn’t feel were good, one of the toys caught on fire on its own and it nearly burned down the house. I am happy that God is cleaning out not only our lives but our homes as well.

He had a really bad tooth ache and when he went to the dentist the doctor told him the cost to fix it, he didn’t know how he would pay that amount, during one of the prayer meetings he was in pain and asked, “God What am I even doing here?” And God spoke to him and told him to go up and Repent. He says that when he went up to repent he felt how the pain went away from his tooth.

Testifies how her marriage has not been the best marriage, she says that she would always blame her husband and asked God to change him. During these 21 days she has realized that he is not the problem but she is, God has brought the pride in her life to become into humbleness in her, she says that her marriage has changed, their relationship with God has even become more intimate and real.

She has been able to fall in love all over again with God and has been able to forgive her ex-boyfriend for hurting her , she realized that it was pride in her she says that just as Christ forgave her she is now able to forgive him and others, she has removed him from her heart as that idol and has put God in that first place in her life. She says that God has shown her his plans and that she is willing to answer to God in a simple “Yes Lord”. God is Good!