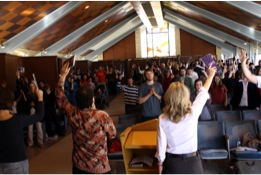 A couple of weeks ago, I stood in the chapel one of the largest universities in our nation and invited students and campus ministry leaders to consecrate themselves to the Lord for 21 days. It was a call to separate themselves from the world long enough to change their appetites, to humble themselves before the Lord, seek His face in intimacy and to repent for their sins that have offended His holy presence (2 Chron. 7:14).

It was an invitation from Jesus to seek Him every day for 21 days until He had regained the primary affection of their hearts. Early morning prayer meetings! No T.V.! Fasting food, no shopping, internet, Facebook! Radical stuff. They said yes!

On February 13th I returned to Texas A & M and together with several campus ministry leaders and pastors we launched “Face to Face – The Divine Experiment” with 300 students on the campus to separate themselves from the influence of the spirit of the age radically realign their hearts with Jesus!